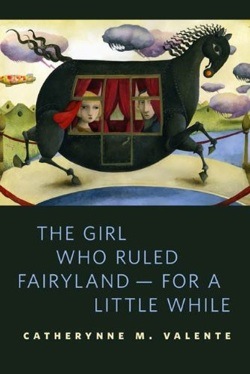 The Girl Who Ruled Fairyland — For a Little While
by Catherynne M. Valente

Yesterday we covered Valente’s version of The Arabian Nights in The Orphan’s Tales; today we’ll be covering one story in the body of work that eventually landed her on the Times Top Ten Books for 2012: Valente’s Fairyland series.

While the first volume, The Girl Who Circumnavigated Fairyland in a Ship of Her Own Making, and the second, The Girl Who Fell Beneath Fairyland and Led the Revels There, are not free to read, you can get a sublime taste of the series through the free story on Tor.com, The Girl Who Ruled Fairyland—For a Little While.

Valente possesses the wonderful ability to turn out her own mythology and folklore in a believable fashion, drawing upon a wellspring of cultures and yet creating something original in the making, rather than just a dolled-up version of Japanese folktales or Russian mythos or—in this case—European fairy-tales. In “The Girl Who Ruled Fairyland—For a Little While”, Mallow meets with fanciful big cats who carry the winds, encounters a carriageless horse that Lewis Carroll would be proud of, and cast-iron ducks who feed on sparks and oil. Her imagination weaves new worlds in the nature of more familiar ones, which I think accounts for the popularity of the books.

As well, Valente’s writing skills in weaving description in the right amounts and when needed, and in setting a certain nature of storyteller’s style and pacing, are more than up to the task; her books and stories are filled with lovely, wistful passages that capture the ephemeral and dreamish state of European fairy-land in the best traditions of classics like Hope Mirrlees’ Lud-in-the-Mist, John Crowley’s Little, Big, and Susanna Clarke’s Jonathan Strange & Mr. Norrell.

Another aspect I really admire about the Fairyland series are the leading characters; September in the books and Mallow in the story are, rather than boys or men walking into or otherwise encountering fairyland, instead girls. There’s a certain trope about men being strong enough and smart enough to withstand the feckless rules of fairyland, and women either living there or being carried away to be rescued. In Valente’s story, it is the girl who takes action, the girl who does the rescuing, the girl who is the active player in events. There’s also never any feminine-shaming for neither September nor Mallow; they are not weak just because they are not engaging in traditional masculine quest-seeking.

If you’re looking for a playful and yet suspenseful time in the world of Fairy, Valente’s stories are a perfect addition to a well-told tradition, bringing something new with the comfort of revered tradition.