The Overherd is a family of stuffed toy cows that I use for comfort. I suffer from severe PTSD (although it’s not only the traumatized who can derive comfort from plush toys). 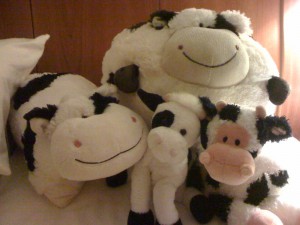 Posts about the Overherd.

The Members by Seniority

The first member and de-facto leader, and my first choice for snuggling in bed or wandering around the house with. She’s a realistic stuffed cow—well, relatively so.

Ike arrived shortly after Overcow because I wanted either an office cow or a commuting cow. (I had plans for one of Overcow’s relatives to become Office Cow, but unfortunately she or he never became available to buy.) He’s more of a doll than the rest, and has taken over the duties of both the car and the office. He also assists the Overcow.

The Arrival of Ike

The first Big Cow of the herd, Cozy Cow was brought on to be travel liaison. Hir pillow form is formidable and quite stable bed-wise, and despite being only second-biggest cow, ze is a reliable guardian of the bed near the door. Bedroom doors are always troublesome for me.

The Arrival of Cozy Cow

Large Round Cow (LRC, similar to how Large Hadron Collider is often abbreviated LHC) arrived in an unassuming box, but then sort of inflated after being left out of it. She is the largest cow by far of the herd, and probably will remain so. She’s shy, but does very well as both guardian of the side-of-bed-nearest-window and as the Epic Hugger, for when regular hugs from the rest of the herd are not enough.

The Arrival of Large Round Cow

One thought on “The Overherd”