This is Ambien. It is nectar direct from the land of Morpheus himself. Nearly the perfect sleeping draught, peaceful and gradual is your descent into his arms–although I urge you to NOT do anything vital, like driving or, a few minutes after taking it, sitting up straight.

The best part about Ambien, apart from the utter effectiveness, is that there’s no hangover effect. None. Zero. Zip. It’s as though you’d gone to sleep naturally.

Gods know it’s been a long time since I’ve done that, even though these days I prefer to spend my weekends trying to sleep than do anything else.

Of course, Ambien has a couple strict downsides:

I treat Ambien like the ambrosia it deserves to be. It’s useful for a clock reset if I need one, or when I’m having one of those hopeless set of days when I haven’t been able to sleep for over 48 hours.

There are some natural remedies nearly as soporific, although not nearly compactly so, such as this Traditional Medicinal’s Nighty Night Tea, which I regard much as one might regard honey wine from the descendants of the Noldor. 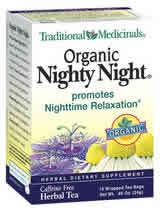 The version for kids even has a cute friendly owl on it. Awww.

The main active ingredient is Passion flower, which has a mild sedative effect, and calms the nerves admirably.

Getting the same sock ’em punch to your squirreling brain processes as one little Ambien pill does is a more prolonged process; but trust me, after three cups over a few hours of this tea, you might as well have taken Ambien–with the same lack-of-side-effect in the morning. Thus my only problem with this approach is that I don’t consider my state of wakefulness until it’s far too late to spread out tea over a few hours.

Now, one tea that does not work for me is Celstial Seasoning’s original Sleepytime, which has the chamomile but not the passion flower. But now there is Sleepytime Extra:

Here’s the dope on valerian, not to be confused with the Valerian steel that makes up the heirloom family greatswords as in George R.R. Martin’s A Song of Ice and Fire. Now I want to try it. You can get them in packs of six from Amazon.com.

Anyways, this will be my first delayed post in WordPress, though unfortunately I’m still awake at 12:49am in the freaking morning.

Time to grab one of the last Ambien in my supply and bid the blog goodnight.

For Weekend Assignment #199 over at Outpost Mâvarin.

2 thoughts on “Sometimes, Late in the Night, It's Just Me and My Insomnia”