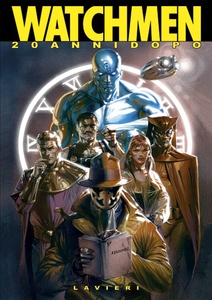 Right now interest (both mine and the Internet in general) has been stirred up again by the new movie coming out, which looks like it’ll be both a blast and taking after the mind and heart of the original work, a rarity in any movie adaptation. Which brings me to the newest addition to the S∂ eBookery.

A long time ago (which by my counting is only maybe 7 years ago) I read Alan Moore’s Watchmen with skepticism, because I could never get into the superhero genre. Probably for the same reason that I can’t get into soap operas; back then, it was the case that, generally, the best of the superhero comics consisted of Dramah!, while the worst was—well, the worst.

And Watchmen was a bit old by that time. Yet it was recommended by Warren Ellis at the time, so surely it couldn’t be bad.

Well. My skepticism evaporated long before the end of issue #1, aka chapter I, aka 11 minutes to midnight. Alan Moore is really something else—he’s a great writer, and Watchmen is an astounding marvel of storytelling. This is the storytelling you get when you have a writer steeped in non-genre (or multi-genre) knowledge, who can pull together references both within and without the plot and characters with the skill of a master weaver. If you have any aspirations towards being a storyteller yourself, you’ll hear the subtle clack-clack of the loom as the pattern weaves itself before your eyes. I remarked once, a long time ago, that Watchmen‘s plot is “crystalline”—that is, it has a complicated structure that forms an intricate pattern, and every time you turn it, you see another facet.

Basically, Alan Moore is the Gene Wolfe of comics. Which means that it takes a certain amount of attention to get all of what’s going on, and a certain amount of knowledge of literature, popular music, art, and the like. For Gene Wolfe, you have help in the form of WolfeWiki to assist with the massive interweaving.

For Alan Moore, there exists multiple annotations and commentary on his works, compiled by readers who often work together as a sort of pop-culture-literary-allusion-mythopoeic-referencing hive mind. (And sometimes there’s one guy who happens to, for instance, have deep and intimate knowledge of Victorian era pulp novels and thus is the only one who can effectively annotate The League of Extraordinary Gentleman. I will never figure out how Alan Moore keeps all that in his head.)

For Watchmen, the best and most complete of these is The Annotated Watchmen by Doug Atkinson. He compiled it in the olden days, when Usenet actually meant something. There are multiple websites where this information has been preserved; I pulled mine from Enjolrasworld.com, a part of the web devoted to comic book/graphic novel annotations. (And which quaintly remarks for downloading the single-file version of the full annotations, “Beware, for those of you on a 28.8 modem, it will take nearly 2 minutes to load.”)

I prefer to do my intense reading away from the computer, so I took the time to compile the annotations into a Kindle-digestible Mobipocket eBook, also edible to those of you with Mobipocket-compatible e-readers and software.

Screenshots under the cut:

I hope you enjoy this particular eBook as you sit back with your copy of Watchmen and take it through its paces.

3 thoughts on “From the eBookery: The Annotated Watchmen”