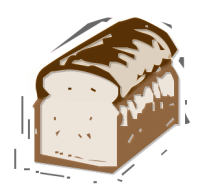 A month back I started baking my own bread.

You may ask, and I certainly asked this of myself a lot before I made the decision, “Why do this in our busy world today, especially with [an] unforgiving job(s) and little time, really, spent at home?”

My reasons are simple:

I got what I wanted—with unexpected extras.

Most notably, I lost weight. Which makes me somewhat suspicious of store-bought bread now; surely they can’t be packing that much extra sugar and whatever in. But there it is.

According to Associated Content, store-bought bread’s most likely suspects of extra fattening include: high fructose corn syrup ((Not that this is worse than sugar, despite all the hype against HFCS these days. HFCS is 55% fructose, 42% glucose; table sugar is exactly 50% fructose and 50% glucose. They’re almost exactly the same.)), sodium stearoyl lactylate, ethoxylated mono- and di-glycerides, thiamin hydrochloride, monocalcium phosphate, ammonium sulfate ((Apparently to feed the yeast, kind of like extra fertilizer. Actually, literally fertilizer. Yeast already eat the carbohydrates in bread flour—that’s kind of the point—but I suppose this way you can save money by using less yeast, at the cost of… well, introducing ammonium sulfate.))

A lot of the above sounds like different kinds of sugars/sweeteners/salts/milk/fats. Some of that is likely not really harmful nor culprits in and of themselves, and some are just the chemical names for common, everyday ingredients; but these ingredients are likely to be present in greater quantities, because gods know that Americans love their sweets far more than most other countries.

Home-made bread ingredients rather surprised me: it’s usually just flour, water/milk, maybe eggs but not commonly so, butter or some kind of oil ((Replaceable, apparently, by unsweetened applesauce! And not badly so, I must say.)), normal sugar, salt, yeast. Not at all like the above store-bought ingredients, even with “normal name” substitutions.

When I started eating my own breads (as well as meals I started cooking myself), I also stopped getting sick as much, and I usually get sick at the drop of a hat long after cold/flu seasons, plus my stomach can be very sensitive. I’m pretty sure this has to do with sick people preparing food (and since people can rarely afford to miss work days, it’s an unavoidable problem) more than the supposed intrinsic healthiness of organic ingredients or whatnot.

And of course, there’s the money savings. I wasn’t expecting much when I started. But here’s the cost of baking a small loaf of plain white bread (it’s about half the size of a full loaf of bread people buy at the store):

Total: $1.44. Let’s round it up to $1.50. That still beats $2 for a full loaf of very cheap bread that dies before I even get through half of it, and home-made bread actually keeps well for a week, which amazed me.

And of course, better breads usually start ticking up to $3.50 to over $4 per loaf, whereas a full loaf of the white bread above would be about $3.

Foo! Not great savings, you say. But now you can do things like adding rolled oats, or substituting honey for sugar, or adding herbs or chocolate or whatever…. and those kinds of “fancy” breads will definitely hit you at $4 per loaf and even higher.

Also, if you’re a geek, making bread is highly fascinating in terms of combinations of ingredients and the results thereof. It’s rather like chemistry that you can eat.

And the last but not least: fresh bread tastes very good. So very, very good. Oh my. Even from a bread machine, believe it or not. You still need good recipes, of course, but that’s what Bread Machine Magic is for (its recipes are even devised to work well in cheaper bread machines).

And that’s why I bake my bread, and have even become a bit obsessed about it, to the point where I once baked six loaves of different kinds in one week (another advantage of making small loaves: more room for experimentation). So I made bread pudding. Yum.

3 thoughts on “Diversion: Saving Money and H.P. by Baking Your Own Bread”