I’m still recovering from the weekend. No more foggy mornings of petrified time-misplaced terror, but still a bit discombobulated.

In the meantime, I discovered this jolly little Republic of Tea tin: 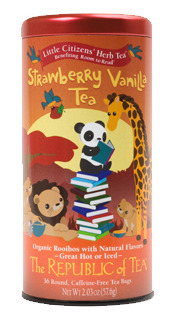 It’s called “Little Citizens’ Herb Tea: Strawberry Vanilla Tea”, from the Republic of Tea, which has a lot of neat teas, both in little tea bags, like this one, or full leaf. You can buy refills from their website instead of buying a whole new tin, but you can buy the tins too.

It’s a rooibos-based tea, which I’d not tried before, but it’s a very pleasant change from black and green teas. Rooibos is technically not a tea, actually, but a herb; still, it makes a nice base for sweeter teas. The strawberry vanilla tea is a subtly-flavored tea, with just enough of a hint of strawberry for a shadow of its sweet tang, and just enough vanilla to make you feel mellow but not make the tea washed out.

The other Little Citzens’ teas are also based on rooibos, including Tangerine and Cherry Apple. I’m not fond of cherries, so I tried the tangerine—it’s much more strongly flavored, and very definitely a fruity tangerine taste, in case someone thinks the strawberry vanilla is too weak.

Anyways, I think I will hug my Strawberry Vanilla Tea and read old mysteries—some of which are new to me, actually; for the first time I read a Lord Peter Wimsey book—Whose Body?, which I enjoyed quite a bit. At some point I’ll also read Father Brown, somewhere after the Sherlock Holmes (which I have obviously read).

It is frustrating that there’s no more legal Wimsey available for the Kindle; nothing else in Sayers’ cabinet with regards to the nobleman detective is being sold on the Kindle, nor had its copyright expired. ((I know there’s a couple copies of Clouds of Witness being sold in the Kindle Store, but it’s… not copyright-expired in the States, so unless these are publishers with actual real ties to the Sayers estate, I would avoid them.)) I’d have to move to Canada to read Wimsey legally on my Kindle (or, apparently, simply jaunt up to Victoria if I want to read any Wimsey from Project Gutenberg Canada).

Of course, there are lots of reasons to move to Canada these days.

I’m not sure Sherlock Holmes and Lord Peter Wimsey would have seen eye to eye for a while. Holmes always did bloody hate nobility.