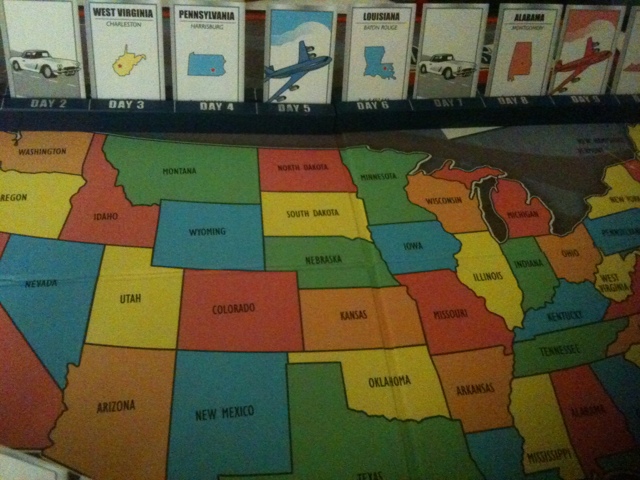 I can’t sleep, and I’m on my last week of oncall so I can’t take my sleeping pills. I did give in and take a Xanax, which is a little bit like drinking a glass of wine, to calm down a bit. Freakin’ mania/insomnia/panicking at not sleeping and being drop-dead tired.

So I’ve decided to start playing calming games. The 10 Days series is one of those easy-going games.

I played it wrong. You’re supposed to start with 10 tiles and replace as you go, and set up the three discard piles ahead of time. Instead I started one rack with no tiles and the other with a state that friends of mine are currently driving away from, and ended it with the state they’re driving to.

I think this affected the game in a decent way. Maybe seeding just the start and end states leads to a more strategic game because there’s less of a chance of a vital state being held by the other player(s) and you not knowing about it. Perhaps ideal start/end states could be collected in a set of trip cards. The experience was certainly a little different.

As always, the routes taken are not suggested to take in real life. The winning route (by a couple turns) ended up like this:

I like the 10 Days series despite them lacking a lot in the strategy area with a corresponding increase in the luck area. It’s educational, can be played in a small space, and interesting to see how routes turn out.

Off to try to sleep again.