Three minutes of just Flourish in a Wolver Den.

One of the reasons I like Flourish is its initial swing arc and its reach. Both are comparable to 4* Khorovod, even though it’s but 2*. And even though you move quickly with the combo attack, you can still change direction. At least, if you aren’t me and my clumsy self.

The thinness of the thrusts balances out the wide-angle slash, but I’ll note it’s useful for not exploding the blast block nearby where I’m dispatching the fire-spitting ‘lisk, while leaving me open in a mob of Wolvers if I haven’t knocked them back with the slash. The fact that the charge attack is thrust-slash-thrust instead of slash-thrust-thrust still throws me off, but I’m not the best player and need more practice with this.

I’ve noticed with other weapons, Chromalisks (the chubby Squishable-ish lizards) take less damage than other Beasts like Wolvers. Not so with Flourish, which apparently pierces through their armor! This is the kind of detail easily missed without damage numbers turned on under options.

Last, the easiest way to challenge yourself again in the game is to use low-level gear—as you can see at the end of the video, I ain’t got nothing to brag about, not even Flourish. And I possibly wouldn’t have died in a level 5+ Dusker cap and coat. Although I was still silly to not kill those Silkwings the first chance I got, which is really what ultimately led to my death.

ETA: I might have done myself a disfavor when I cleared all the bushes from the final room. From looking at earlier footage, Flourish works best when mobs are divided, and bushes and other obstacles are ideal for this. I think this tactic may not work for other lines of swords where knockback is their key strategy (such as the Troika line) and leaving obstacles hurts many charge attacks (like the spin of the Tempered Calibur and upwards of the Calibur line)… but I’ve got to try this. Although I will get all the exploding blocks out of the way regardless.

In pictorial summary, this is Flourish: 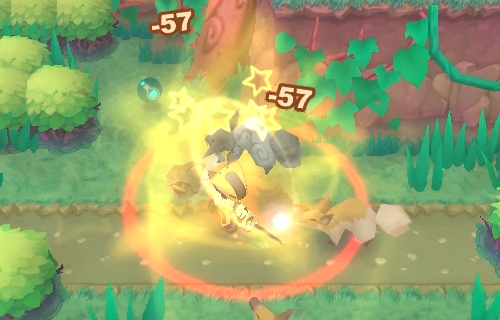 Now, if only Basil would let me buy Swift Flourish!