I had a difficult time understanding Freytag’s Pyramid (or Triangle), at least as the more common interpretations put it. The most glaring example I can think of is the idea that the peak of the triangle, the climax, happens close to the end of the story and is the height of tension—and yet I can think of many stories wherein the tension keeps ratcheting up all the way towards the end. It made no sense for falling action to represent the decrease of tension, unless you want to bore readers. 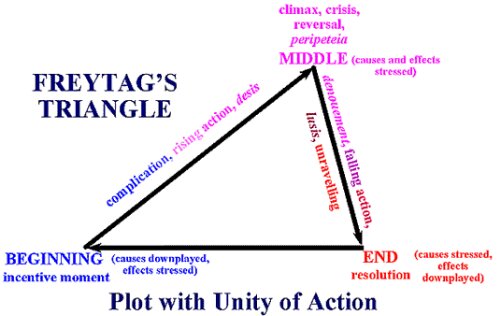 Vexing, as this didn’t fit the best stories I knew. Oh well, I thought, and didn’t revisit the subject for quite some time.

And then, inspired by Nick Mamatas post on poor writing advice (his second in relatively recent memory, actually), I began to hunt for the true meaning of Freytag’s pyramid/triangle/whatever, since Nick thought highly enough of this device to recommend it to others.

The internets is not always the most reliable source for this kind of stuff. So I discovered, through the Wikipedia page, an (the?) English translation for Freytag’s original work, The Techniques of Drama. It’s a dry text, and the OCR was carried out on an old book and not corrected, leading to some interesting missing text, which was rather depressing, but I plowed on through enough to get a sense of what he was talking about. And then I discovered this sublime condensation of his work and was satisfied.

One of the most salient point I picked up out of this was the actual definition of climax—at least, according to Freytag—which is that it’s the turning point at which play becomes counterplay, or vice versa, wherein play is when the hero is proactive, making decisions, pushing the plot along; and counterplay is when events start to bear fruit or whirlwinds, and the hero is reactive instead.

The best part of this construction is that it doesn’t limit you to a set number of acts, like three or five, which doesn’t fit most thriving stories. The hero can encounter any number of doors of no return during the rising action and falling action, and the of course the climax. And you aren’t restricted to a lack of tension after the middle or 75% or whatever. You don’t have to convert the pyramid into jagged spikes to represent the ebb and flow of tension. The pyramid/triangle suddenly becomes a much more flexible tool.

If you can bear to put up with the full text of The Techniques of Drama, Freytag discusses more about character and motivation (a point raised quite often in narrative advice), what is drama and what is tragedy, what makes for good drama (hint: character), and even a little bit about subplots (as far as he’s concerned, viable as long as they contribute to the main plot, reinforcing his definition of the unity of action). He discusses the need for action to arise out of the character’s motivations, not merely for the convenience of the plot. You may recognize some of this stuff.

I’m going to apply this as an analytical tool (rather than a plotting template) to my work for NaNoWriMo. Not to say that you can’t analyze what’s going on as you write… at least, I think this is the case. We’ll see if it works out for me during the actual NaNoWriMo. In combination with something like the Snowflake Method, wherein the steps act as breakpoints for you to consider your story before you head too deep into uncharted territory, it has the potential to be very powerful.

Not that this is the way for everybody to do their writing, of course. Everybody has their own process. The trick is figuring that out for oneself.